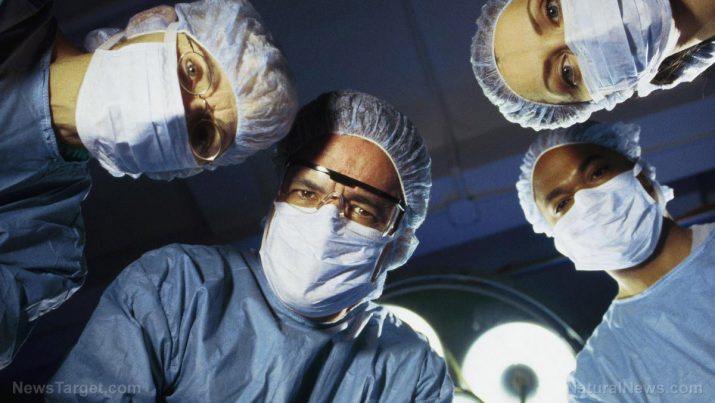 To hear hysterical Democrats say it, any attempt at health care reform by the GOP is equivalent to “killing Americans.” In their delusional world — which has long since abandoned anything resembling reason or reality — the Obamacare system saved lives and killed no one, while a Republican-run system would be the equivalent of the mass murder of Americans. Seriously, this is the dark rhetoric now being spewed by Democrats whose words achieve nothing other than inspiring psychopathic left-wing killers to gun down Republican congressmen on a baseball field.

Yet the sobering truth is that for as long as the U.S. “sick care” system has been dominated by pharmaceutical interests, it has been killing Americans by the hundreds of thousands per year.

Right now, prescription drugs kill well over 100,000 Americans per year, even when properly prescribed. The more honest number is likely over 200,000 per year once you consider the opioid epidemic, which is now killing more people than all gun-related deaths and shootings combined.

A statistical analysis reveals that prescription drugs are 16,400% more deadly than terrorists, and iatrogenic deaths — deaths caused by doctors, hospitals and drugs — had already reached 783,000 per year over a decade ago (source: “Death by Medicine” PDF), which is the equivalent of multiple jumbo jet airliners dropping out of the sky every single day, filled with hundreds of passengers each.

Somehow, Democrats have decided that none of these deaths count. Nope, all the people who died under Obama’s health care fiasco are forgotten and swept under the rug. It’s only the people who die after the Republicans take over the health care system that will be counted, you see. And so the same Democrats who bent over backwards to argue that Obama’s health care system was the best system in the world — a system that “saved lives” through “treatment” with dangerous prescription medications — will flip the script and argue that the GOP’s health care reforms suddenly transform America’s health care system into a murderous, heartless regime… a “killing fields” of bad medicine that causes the mass death and suffering of as many people as possible as a means to fulfill the dark, evil hearts of Republicans who are seething with hatred, we’re told.

Hillary Clinton, a mafia-style political operative whose rise to power follows in the tracks of a large number of mysterious murders — including the recent killing of DNC whistleblower Seth Rich — is now labeling the GOP the “death party” for wanting to reform health care.

Her 2016 rival, Sen. Bernie Sanders (I-VT), tweeted a similar message — then deleted it.

The consensus across the deranged Left is that if climate change doesn’t kill us all first, the Republicans will kill us with health care reform. Never mind the fact that most people are killing themselves by eating processed factory foods laced with toxic pesticides and glyphosate weedkiller, all while covering up their health symptoms with toxic medications and deadly prescription drugs (which really do kill people).

But all this brings up a far larger question: Does more health care always save lives?

The rational answer is “no.”

It’s all a MYTH: More “health care” does not save lives: Overdiagnosis and overtreatment lead to a shocking number of medical deaths

The claim that health care reform will automatically lead to people being “killed” is, of course, the same sort of total bunk nonsense hysteria we’ve come to expect from Democrats in the post-Trump election victory era. These are the people who have become the modern era’s doomsday prophets with their incessant fear mongering over the debunked global warming fiasco, after all. Just recently, when Al Gore observed a particularly strong tide arriving in Miami, he freaked out and declared that the oceans were rising by the hour from melting ice caps.

So take the health care hysteria from Democrats with a healthy does of skepticism. These days, Dems are losing their minds over everything from Neil Gorsuch to a gay conservative named Milo wanting to speak on campus, using words that Leftists have declared to be “violent assaults” against their delicate, deluded minds.

It turns out that in a first world nation, spending more money on health care does not necessary save lives. That’s mostly because the status quo health care system is little more than a Big Pharma con job pretending to be a medical system. The singular goal of the health care system as it exists today is not to prevent disease or make anyone healthier, but rather to extract the maximum amount of money from a sick population by keeping them diseased while brainwashing them into thinking more chemical medications will somehow solve all their health problems.

Listen to my Health Ranger Report podcast to understand why more health care does NOT always mean fewer deaths.

The must-read book that details all this is called Less Medicine, More Health by Dr. Gilbert Welch. The book debunks seven widely-held assumptions about health care that are believed by almost everyone… and these are the same assumptions underlying the Democrats’ twisted insistence that any reform of the health care system is somehow an automatic death sentence almost bordering on a Holocaust-scale apocalypse. The most murderous thing you can do to a woman, we’re now told, is take away her “right” to a free mammogram… even when 9 out of 10 mammograms cause harm via false positives, overdiagnosis and overtreatment with toxic medical interventions such as chemotherapy.

According to Dr. Welch, there are seven key assumptions about health care that are completely false. Here’s his list from his book:

ASSUMPTION #1 – ALL RISKS CAN BE LOWERED

Disturbing truth: Risks can’t always be lowered—and trying creates risks of its own.

Disturbing truth: Trying to eliminate a problem can be more dangerous than managing one.

ASSUMPTION #4 – IT NEVER HURTS TO GET MORE INFORMATION

Disturbing truth: Action is not reliably the “right” choice. Sometimes doing nothing is exactly the right thing to do.

Disturbing truth: New interventions are typically not well tested and often wind up being judged ineffective (even harmful).

ASSUMPTION #7 – IT’S ALL ABOUT AVOIDING DEATH

If Republicans really wanted to save lives, they should end the pharma monopoly over medicine and legalize healing

The incompetence, corruption and fraud of the current health care system is so out of control that the best way to save as many lives as possible would be to end the pharmaceutical monopoly over medicine and legalize the many forms of complementary / alternative / holistic medicine.

Did you know that even though vitamin D can prevent almost 4 out of 5 cases of cancer, any doctor who prescribes vitamin D as a “cancer prevention” nutrient can lose her medical license?

That’s because the pharmaceutical drug cartels have worked incessantly to criminalize nutrition, natural medicine and disease treatment protocols that really work to save lives.

Republicans aren’t killing people with health care, in other words… BIG PHARMA IS! (And, by extension, the FDA and CDC.)

Sadly, the Republican establishment is just as corrupt as the Democrat establishment when it comes to real medical reform. Pharmaceutical interests, of course, hold intense sway over both parties, and the multi-billion-dollar racket of disease mongering, medical monopolies and the suppression of natural cures is so incredibly lucrative that no lawmaker dare threaten the disease-centric revenue model of the drug cartels.

And that means the real reform of the medical system can only come with the collapse of the United States government as we know it today. When the bankrupt system can no longer sell off its junk debt, print more fiat currency or borrow from tapped-out creditors, the medical system implodes for the simple reason that it has become almost entirely dependent on government subsidies for its existence.

After all, real, rational people would never pay $5,000 a month for a prescription drug that masks the symptoms of a preventable disease. Only government is stupid enough and corrupt enough to keep funding that level of medical insanity, and any government that chooses to do so will eventually find itself bankrupt, ruling over a nation of diseased, medicated zombies who are too sick to even show up and work productive jobs.

For America, that day is coming sooner than you might think. After all, the working American taxpayer can only subsidize the lunacy of a corrupt semi-fascist government-pharma industrial complex for so long. At a certain point, it all becomes so ridiculously unaffordable and unjustifiable that people start growing their own herbs, superfoods and medical remedies that are safe, effective and affordable. When cancer drugs are $50,000 for a treatment course while vitamin D — one of the most potent anti-cancer nutrients in existence — is just five cents a day, it’s not difficult for consumers to make their own “reform” decisions and reject the medical monopoly system.

Real reform, in other words, won’t be sponsored by politicians or voted on in the Senate. Real reform is already under way as more and more people realize the pharma-run medical system can’t make them healthy. It can only make them sicker and more impoverished, and the more chemical pills they swallow, the faster they plummet toward destitution and suffering.

As long as Big Pharma runs our medical system, America can never be great again, no matter how boldly a few Republicans tweak the edges of the mammoth medical profiteering complex known as the “health care system.” No nation can achieve sustainable abundance unless its people are healthy and productive. Yet Big Pharma, the FDA and the CDC are deliberately working in the opposite direction, seeking only to maximize disease profits for the interests of a few wealthy corporations with names like Merck and Eli Lilly.